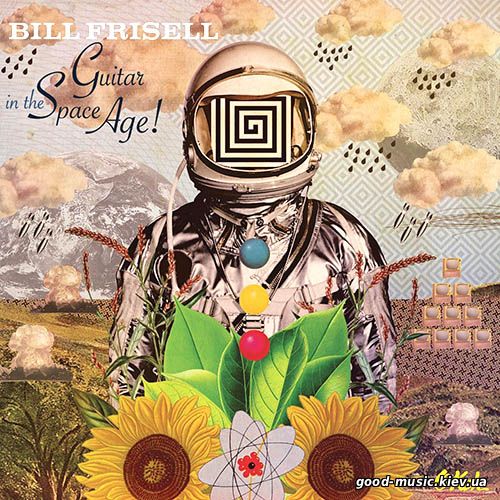 Style: Fusion / Jazz-Rock
Country: United States
Format: FLAC, tracks (no .log, no .cue)
Size: 336 Mb
Tracks:
1. Pipeline.
2. Turn, Turn, Turn.
3. Messin' with the Kid.
4. Surfer Girl.
5. Rumble.
6. The Shortest Day.
7. Rebel Rouser.
8. Baja.
9. Cannonball Rag.
10. Tired of Waiting for You.
11. Reflections from the Moon.
12. Bryant's Boogie.
13. Lift Off.
14. Telstar.
Total Time: 55:13
Musicians:
Bill Frisell: electric guitar
Greg Leisz: pedal steel, electric guitar
Tony Scherr: bass
Kenny Wollesen: drums, percussion, vibes
Review:
Just when you think you’ve got guitarist-composer Bill Frisell all figured out, confident in your expectations, this American original shakes things up with an unexpected glimpse into those layers of consciousness which inform his rootsy, inclusive, oh so personal style of musical outreach.
With his new album, GUITAR IN THE SPACE AGE!, Frisell goes back to the music that first sparked his imagination. "There’s something about being the age I’m at now,” reflects this iconic guitar hero. "I turned 63 this past spring, and after playing for more than 50 years, it just feels right to once again play some of the music which shaped my consciousness during my formative years, even to play some of it for the first time…and maybe get it right. GUITAR IN THE SPACE AGE! isn’t really an exercise in nostalgia, but about a re-commitment to keep learning, to firm up the foundation.
"On this album is some of the music I was hearing growing up in the ‘50s and early ‘60s,” notes Frisell. "There is so much history. Back and forth. Before and after. It’s impossible to pin things down. That’s the beauty. We all learn from each other. When I listen to Jimmy Bryant, I know he must have listened to Charlie Christian, and The Ventures heard Chet Atkins, and Chet Atkins listened to Johnny Smith. It’s like a kaleidoscope. You look at one piece of music, and it immediately shoots out into all these directions. All these beams of light cut through whatever words are used to try to box it in.” As a baby boomer who came of age in the 50s and ‘60s, there is an undeniably autobiographical element to the tenor and tone of the repertoire which Frisell explores on GUITAR IN THE SPACE AGE! along with long-time collaborators Greg Leisz (pedal steel & electric guitar), Tony Scherr (acoustic bass and electric bass guitar) and Kenny Wolleson (drums and vibraphone).
"I’ve known Kenny, Tony, and Greg for a long time now,” recalls Frisell. "I learn so much from them. They are my teachers. When I first heard Tony and Kenny play together, they had their own ‘sound.’ They play together like brothers. The first time I was introduced to Greg, I knew we’d be playing together before we had played a note. Greg and I grew up during the same time. The same generation. His first electric guitar was a Fender Mustang, as was mine. Nothing needs to be said or discussed. There is understanding. He is my guitar brother. My hope is that this band plays together like a family.
"I hope people don’t think this is a joke or nostalgia. It first comes from loving this music and loving these guys. It’s about learning and getting deeper into the music, and researching where we come from. I’ve never been able to buy into the idea of there being a hierarchy in music. Like… folk music is at the bottom, then blues, rock, jazz and classical at the top… or whatever. As though one music is higher or lower or more difficult than another. It’s all difficult. It’s all beautiful. It’s all one thing.”